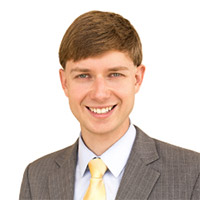 Andrew Svehaug is quickly becoming one of the leading STEM educators of his generation. As the Founder and CEO of Code to the Future, he is responsible for the leadership and strategic vision of the organization. With achievements such as being a U.S. Scholastic Chess Champion player and coach, and leading the development of innovative STEM-based programs in schools around Southern California, Andrew is in high demand as an education consultant and clinician.

He holds an M.B.A. and a double-degree from Azusa Pacific University. Andrew and his work have received media attention in publications such as The Columbian, The Santa Barbara News-Press, and the Brooklyn Daily. Andrew’s career has taken him across the United States, to Canada, Sweden, the U.K., and he has also been a guest clinician in Germany.

Led a Panel on Education at MINECON in London (along with David Miyashiro Superintendent of CVUSD, Vu Bui COO of Mojang, Deirdre Quarnstrom Head of Minecraft in Education at Microsoft)